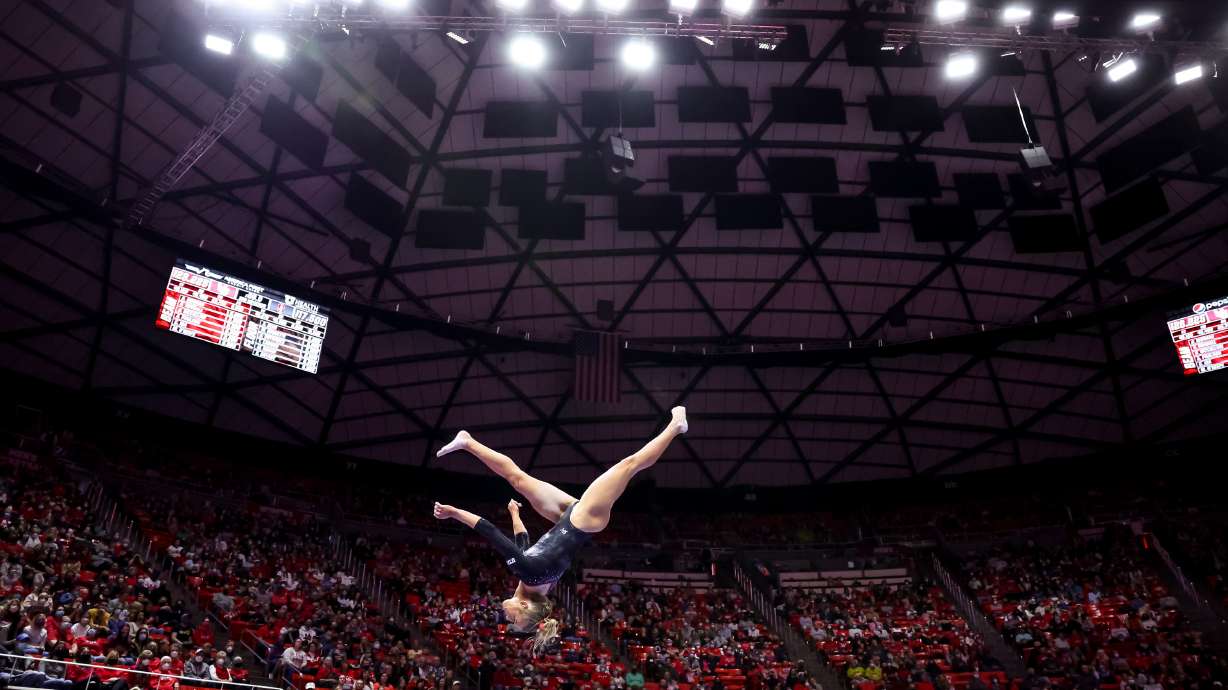 Utah’s Abby Paulson competes on beam during a meet against Stanford at the Huntsman Center in Salt Lake City on Saturday, Jan. 29, 2022. (Spenser Heaps, Deseret News)

SALT LAKE CITY — It was not Utah’s night.

And while the program’s first loss of the season hurts in many ways, including the upcoming NQS ratings that will come out in a couple weeks, it was the loss of Jillian Hoffman to another season-ending injury.

Hoffman delivered a 9.90 vault in the leadoff position Saturday night, but suffered what head coach Tom Farden said was an Achilles tear to her right leg. The devastating injury ends her season in an injury-riddled career with the Red Rocks — this being her third season with an injury.

Farden said the news of Hoffman’s injury has him “beside himself,” especially given how hard Hoffman has worked each season to get back on the floor to compete with her fellow gymnasts.

“This is an athlete that’s battled back from season-ending surgeries two years in a row. Had one of the prettiest vaults she’s done in competition,” he said. “You’re just gutted for the athlete, especially this one because I’ve watched her perseverance for the past three years and admire it, because I don’t think there’s many people that have that type of perseverance.”

Her perseverance led to a stellar rebound this season as she became a reliable gymnast in the leadoff position on vault and floor this season.

Hoffman suffered the injury on vault, which was the second event of the night for the Red Rocks. She was scratched from the leadoff spot on floor on the following event, indicating the first sign that something was wrong in a meet that was already going sideways for Utah. She was later seen on crutches and in a boot.

At that point in the meet, Utah trailed Cal 98.800-98.675 and was in desperate need to turn the night around. But the “human element,” Farden said, of the night was watching a teammate go down with an injury — not again for Hoffman.

But the gymnasts rallied “on the fly” and had a great night on floor. Abby Paulson led off with a 9.90 score to jumpstart the event and was followed up by Adrienne Randall’s 9.875 and Jaedyn Rucker’s 9.90 to bring some semblance of normalcy back to a team many believe could make a splash at nationals.

Maile O’Keefe added a 9.875 in the fifth spot before senior Sydney Soloski nailed another dynamic floor routine in the anchor position to finish with a 9.975 score — arguably one of her best routines of her career. In a season where so many 10.0’s have been awarded throughout the country, Soloski and the fans remain in anxious anticipation to see the perfect score awarded.

Floor turned the tide for the Red Rocks with a 49.525 team score as California recorded a 49.250 on beam. The strong showing on floor gave the Red Rocks a narrow 0.150 lead going into the final event of the night and hopes of turning the night around.

But the two programs went in opposite directions in the final event as California finished floor with a 49.475 team score, including four of the team’s scores counted no lower than a 9.90, and Utah struggled for the second-straight week on beam to finish with a 49.075 team score.

It’s the third time in four weeks the Red Rocks have stumbled on beam and recorded scores just over the 49.0 mark. Sandwiched between the low-scoring showings is a nation-leading 49.725 score in what has been an up and down season.

Amelie Morgan continued the theme of the leadoff position scoring no lower than a 9.90 for the Red Rocks. She opened up beam with a 9.90 score that was followed by Alexia Burch’s 9.875 and Adrienne Randall’s 9.80 score. The Red Rocks hoped to drop Randall’s score with higher scores from the team’s final three gymnasts, but the rocky night continued.

Abby Paulson, who replaced Grace McCallum in the lineup in the fourth spot, had a stumble and finished with a 9.575 that was followed by Cristal Isa’s 9.075 after she fell off the beam. O’Keefe finished the night with a 9.925, but the damage was already done and there was no hope for the Red Rocks who were forced to take Randall’s 9.80 and Paulson’s 9.575 scores.

It was a consistent theme for the Red Rocks Saturday night as the leadoff gymnast scored high and the interior of the lineup struggled to maintain momentum. Farden said he blames himself for some of that with his consistent changing of the lineups through the first two months of the season. But he added that the team needs to “iron out” some consistent problems and make adjustments.

The Red Rocks return home to welcome Oregon State to the Huntsman Center on Friday at 6 p.m.