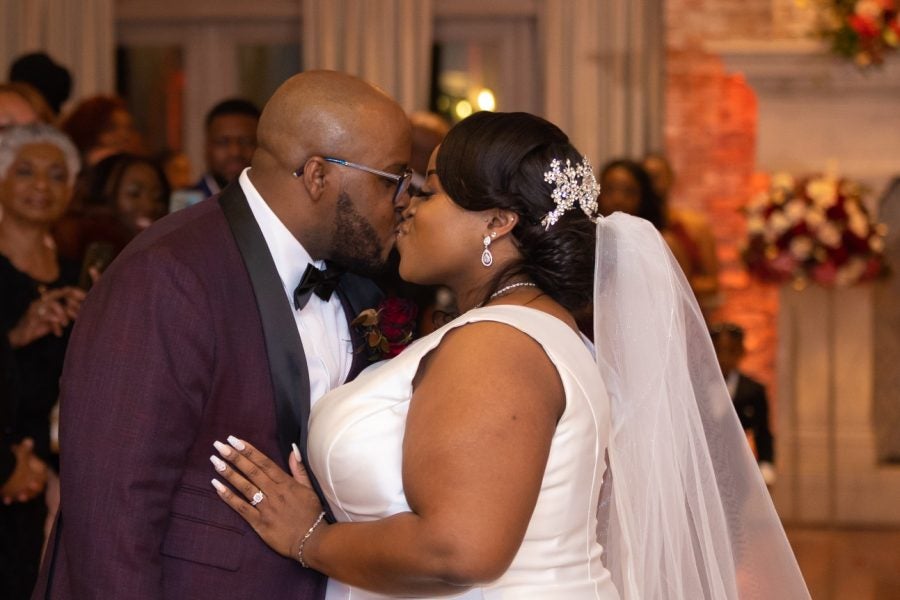 It was only a matter of time before Cherie and Declan met. In 2013, the two were both at the same law school, had mutual friends and those individuals wanted to connect them. Cherie also happened to be a star student at their law school, so her reputation preceded her, making her even more of a draw for Declan. When they finally made each other’s acquaintance at a friend’s birthday party, Cherie was everything he could have imagined and more. “I was finally happy to meet the person I heard so much about,” Declan tells ESSENCE. “I knew that she was smart but I also thought that she was cute. I spent the entire night introducing her to all of my classmates whom she had already met, but she was a good sport and went along with it.”

The two haven’t stopped talking since that evening. And while they became best friends and danced around their feelings for one another for a while, those feelings were too big to ignore. By the summer of 2014 they made things official as boyfriend and girlfriend. In summer of 2020, after seeing each other through so many things, from tough exams to personal struggles, Declan popped the question to Cherie in front of their family and friends at her parents’ house.

Nearly two years later, the Queens residents recently said “I do” on February 25, 2022 in Long Island, New York at the Somerley at Fox Hollow. The day Cherie became a Mrs. was also the day she became an Esq., a licensed, practicing lawyer. Therefore, February 25 holds double the special meaning to her.

“It’s a dream having two of the greatest moments of my life so far fall on the same date,” she says. “Once I decided on law school, I was confident I’d get to add the Esq. to my name one day, but the Mrs. didn’t really seem like a real possibility until Declan came into the picture.”

The two plan to make many more of their dreams come true together, so it makes sense that they had a dreamy celebration of their love. See photos of their special day below, and learn more about their journey to the altar in this week’s Bridal Bliss.

Venue: The Somerley at Fox Hollow

How the Bride Knew She’d Found the One

“In getting to know Declan, I quickly realized that my first impressions of him were accurate,” Cherie says. “We really got to know one another the summer I was studying for the bar exam. Although we never talked about what was happening, it was obvious we both had some interest in one another. I spoke to him just about every day during my break times at lunch, dinner and right before bed. He was the best part of my daily routine, and it really meant a lot that he saw me at one of the toughest times of my life and still stuck with me. By the time I took the exam and summer was over, I felt like this could be more than just a summer crush. But we both had to adjust to new chapters–him with school, and me settling into a new work position, so we took things slow even though we never stopped keeping up with each other. It was during that time I realized he was the one. I couldn’t and didn’t want to imagine days without him. We made things official the following year – it’s been the two of us ever since.” 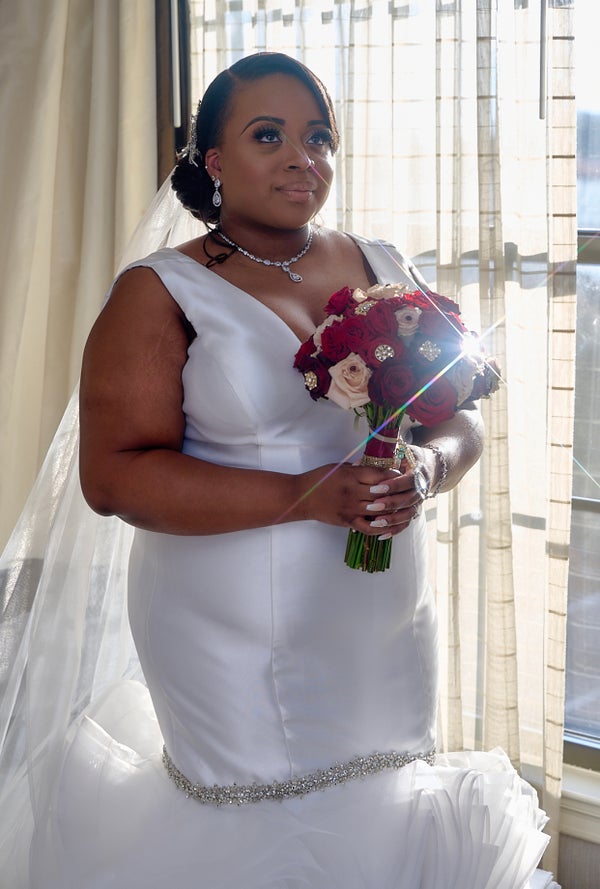 How the Groom Knew He’d Found the One

“Once I met Cherie I knew that I needed to keep her in my life,” Declan says. “Cherie quickly became one of my best friends and someone I relied on. During the summer of 2014 she was taking the bar exam and I was in my first job as a rising second year law student. During that summer we realized that we could truly lean on one another. I knew that she was the one because I felt safe to open up to her and she was my safe place at many difficult times during my life.” 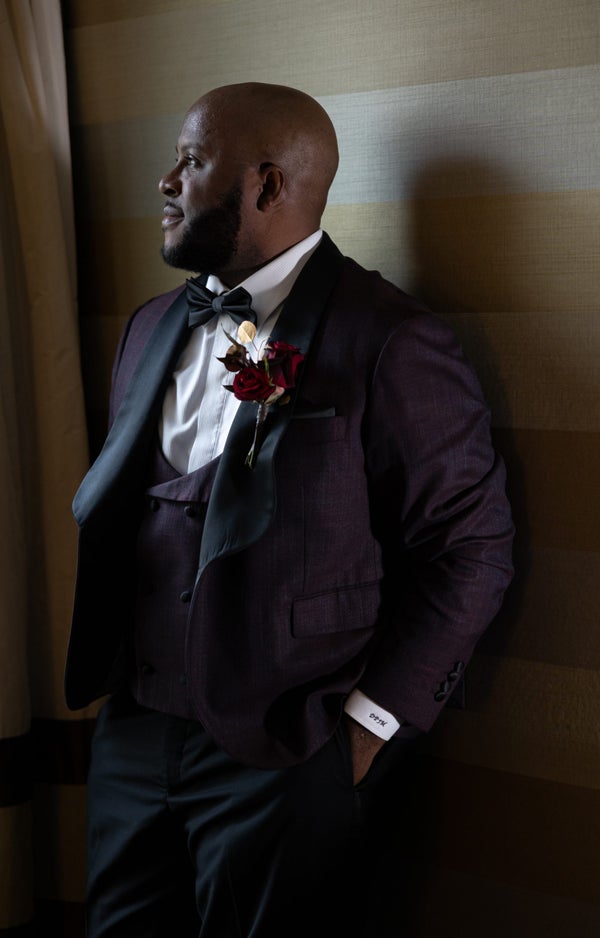 Declan proposed to Cherie on August 8, 2020.
“The number eight signifies new beginnings while 2020 signified the clear vision he had for our future,” she says. The day of, the couple went on a picnic and then were supposed to visit her parents afterward. “Declan was sweating the entire car ride and seemed nervous, but he tried to assure me it was because it was hot–but we were in an air conditioned car and it was really cloudy out. I didn’t think much of it, but now I know better,” she says. “We got to the house and I saw balloons and our family members, and I thought it was a birthday party for me. The pandemic had canceled the original party that was planned earlier in the year, so that theory made sense to me. However, I was wrong. Declan called me to get me to turn around, and it took me a second to realize that none of our family members in the backyard were moving and that Declan was actually proposing. I’m not a crier, but when he got down on one knee the ugly crying started and would not stop. Of course I said yes.” 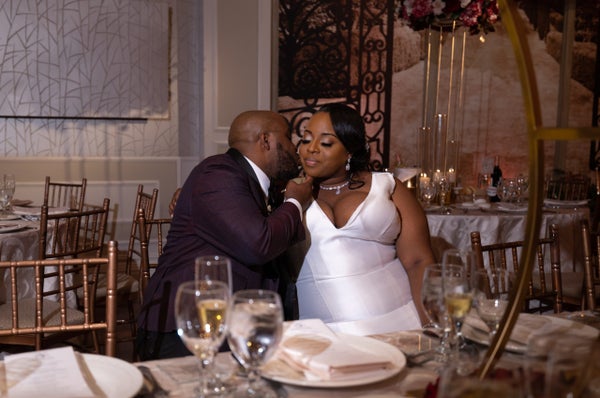 “We knew we wanted to get married on Long Island. We researched several locations, but the Somerley at Fox Hollow was the first location we saw and we fell in love,” Cherie says. “We walked away from our tour thinking that we could actually see ourselves getting married there. The overall layout was amazing. Every floor had its own feel with something special to offer, and the newly renovated bridal suite was beautiful and spacious. We visited a handful of additional venues, but were stuck on The Somerley. We also really liked that the Fox Hollow Inn was located on the property to help keep all the events of the day in one central location.” 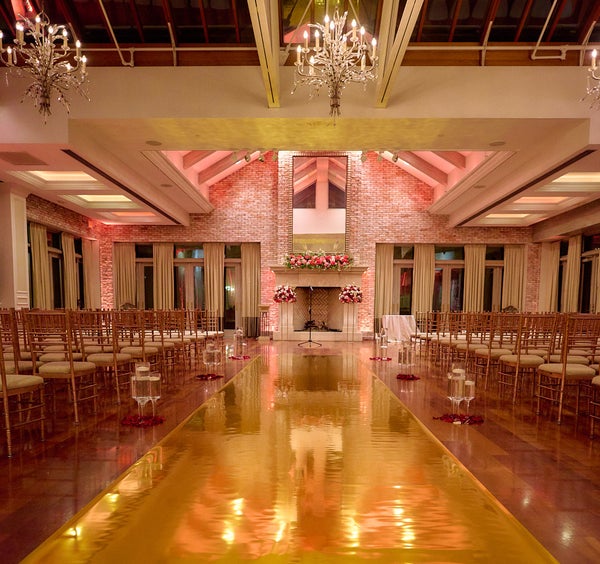 “Planning was an experience to say the least,” Declan says. “Overall, the process was smooth, but the pandemic made the process a bit stressful, as did finalizing the smaller details of the wedding as the day drew closer. There were a couple times it felt like there were new developments that were going to force us to change course, but thankfully that never happened. Cherie was not the type of person who spent her whole life dreaming about this moment, so it took her about two months to figure out what she, as a bride, even wanted to do. Then we had to put all of our ideas together.” 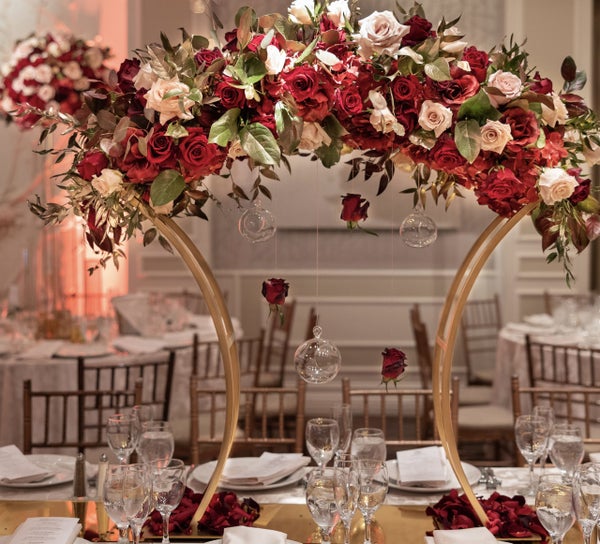 “We ultimately wanted the wedding itself to be a representation of the both of us, and we made just about every decision together,” Cherie says. “We ultimately went with a cabernet, gold and dusty rose color scheme, and decided we wanted a romantic winter wedding feel since our wedding was only 11 days after Valentine’s Day. We hired Denise from HACTAC Events for florals and day of coordination, told her that was what we were looking for, showed her a few pictures, and she delivered. While we didn’t have an official theme, we incorporated our mutual love for Broadway into our special day through some of our song selections, as well as theater ticket style seating cards and ticket themed table numbers made by Declan’s sister-in-law.” 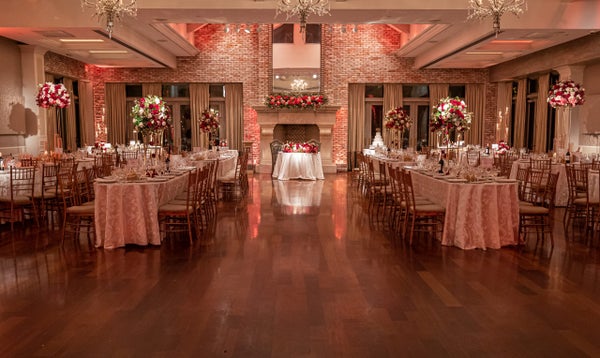 The couple love music. Fun fact: They run the drama department together at their church. 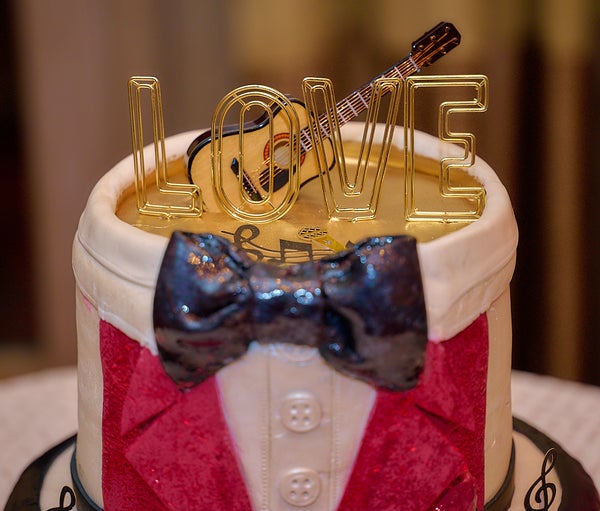 “Honestly, it’s a dream having two of the greatest moments of my life so far fall on the same date. Once I decided on law school, I was confident I’d get to add the Esq. to my name one day, but the Mrs. didn’t really seem like a real possibility until Declan came into the picture,” Cherie says. “It’s also really meaningful because we grew through the process of becoming lawyers together and now we’re married and will get to grow in life together. We have so many more milestones to reach, but it’s truly special that we have gotten to share these big ones so far.” 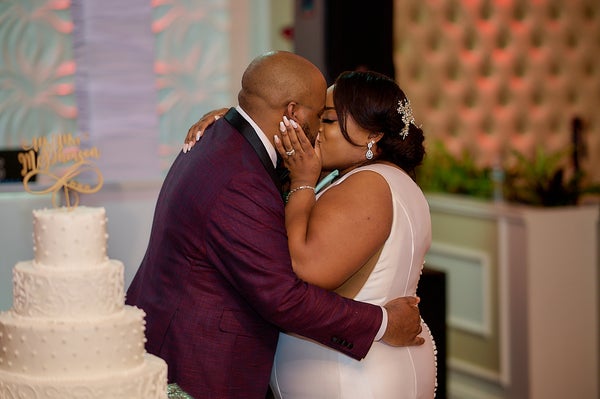 The Bride’s Most Memorable Moment

“My favorite moment of the ceremony was getting to read our vows to one another,” Cherie says. “That was the one moment of the ceremony where it really felt like it was just us two in the room. I was nervous the entire ceremony, but after that point, nothing else mattered at all. It was also really special because I’m not one to talk about how I feel out loud, but it felt good to let Declan know in front of our family and friends, just how much I love him.” 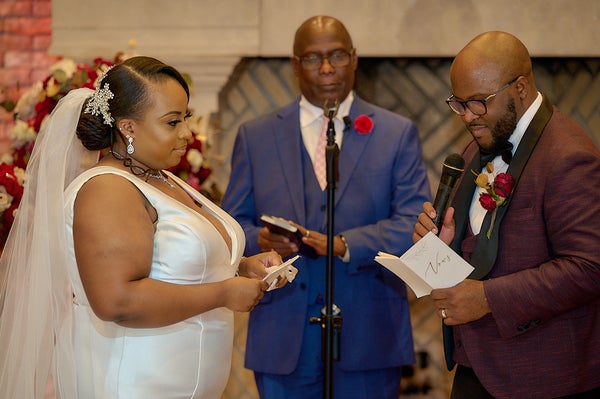 The Groom’s Most Memorable Moment

“I enjoyed the entire ceremony,” Declan says. “My uncle, who is also our pastor, officiated the wedding and the ceremony reflected the lighthearted nature of my relationship with Cherie. My favorite moment of the wedding is between seeing Cherie walk down the aisle and reciting our vows. Admittedly, I cried during both. While planning, we experienced a lot both personally and professionally, so to be able to hear my partner affirm her love for me meant the world.” 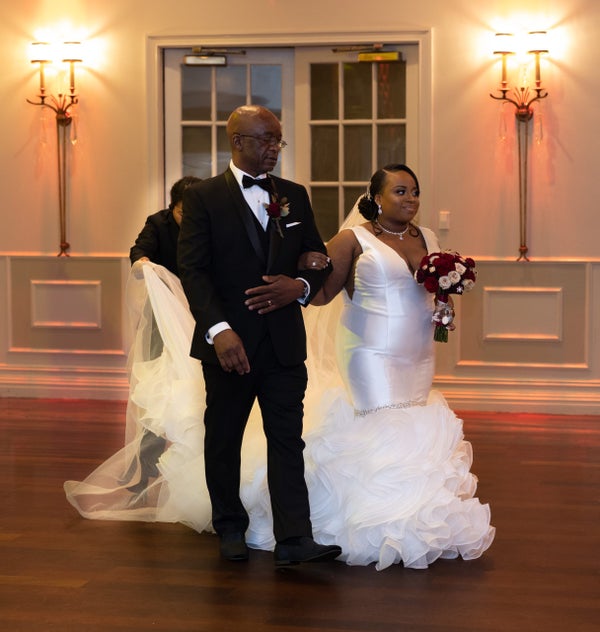 The Bride’s Hopes for the Future

“I hope that in marriage, we continue to grow in love physically, mentally, emotionally, and spiritually, and that we never stop learning from one another,” Cherie says. “My greatest hope is that we always choose each other, even if things get tough. I’m looking forward to getting to do life with my best friend every single day, expanding our family, traveling, and really getting to enjoy life and all it has to offer.” 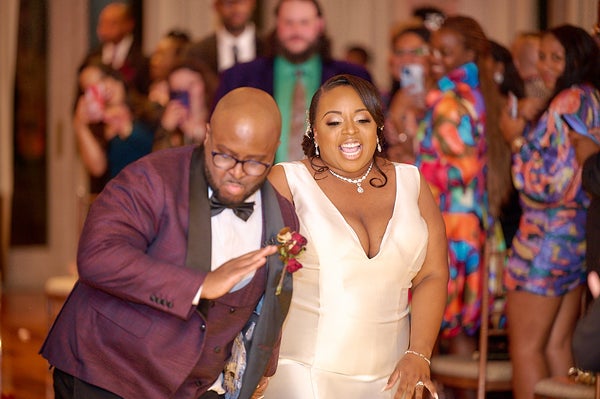 The Groom’s Hopes for the Future

“I hope that we continue to grow together spiritually, professionally, and personally as a team,” Declan says. “I would like to have kids in the near future, and pray that the love we have for each other continues to grow. In my vows, I promised to love Cherie as Christ loves the Church with a love that is patient and unyielding not only for our wedding day, but also for forever. I intend to keep that promise in our future together.” 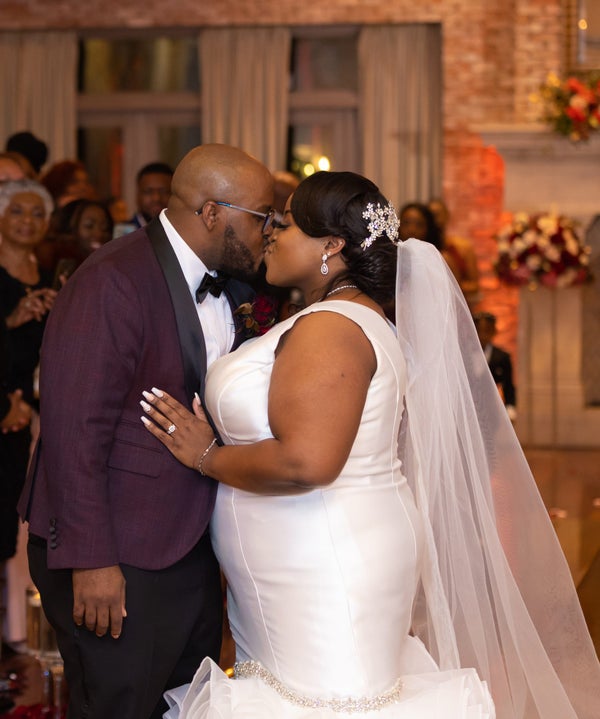